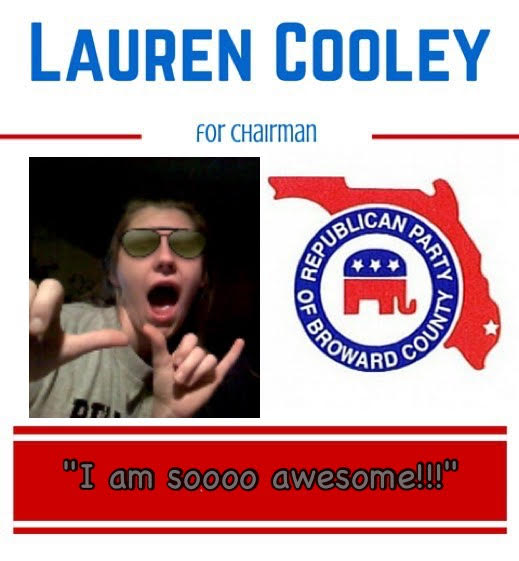 In her email, Cooley boasted she had 26,000 Twitter followers. On Twitter, your followers receive messages you send via the social media application. On October 13, Cooley announced her campaign for BREC chair. Since then, Cooley has sent out just 28 tweets. Only one, a Sun-Sentinel article, mentioned the Broward Republican party. Only two more tweets were even related to Broward county.

The rest of Cooley’s tweets mentioned the Democratic Party debates, promoting Lifezette, Starbucks, lousy customer service at FEDEX, the Women Impacting the Nation (WIN) meeting in Palm Beach, Happy “Back To The Future Day,” and Donald Trump’s visit to Doral.

Not even a lousy tweet to attend tonight’s BREC election in Plantation.

Among Cooley’s fake Twitter followers: Amar Singh from “sector 24 Faridabad,” Kahikilani Grant, Calefornya Girls, Vibes With BAE, Sarowar Parvej, Gilgamesh Nabeel, 145,000+, MrzPeachezPleasurez and Mr. Puppy. It’s safe bet most of these folks are not BREC members. At least not yet.

BREC doesn’t get much love on Cooley’s Facebook and Instagram accounts. Cooley announced her BREC campaign on both social media accounts on October 13. Since the announcement, Cooley has posted pictures just 3 times on Instagram: a picture at Starbucks, a picture promoting the Palm Beach WIN meeting and a picture of bacon and eggs. Cooley has just 313 followers on Instagram.

On Facebook, Cooley has made 14 posts since her October 13th announcement. She posted her bacon and eggs picture, a Lifezette article she authored, a WIN meeting post, 7 posts regarding Leadership Institute activities at FAU and the University of Miami and a post from the Donald Trump rally in Doral.

Cooley did post the recent Sun-Sentinel article on the BREC election.

Too much self promotion, Not enough action. BREC needs better.