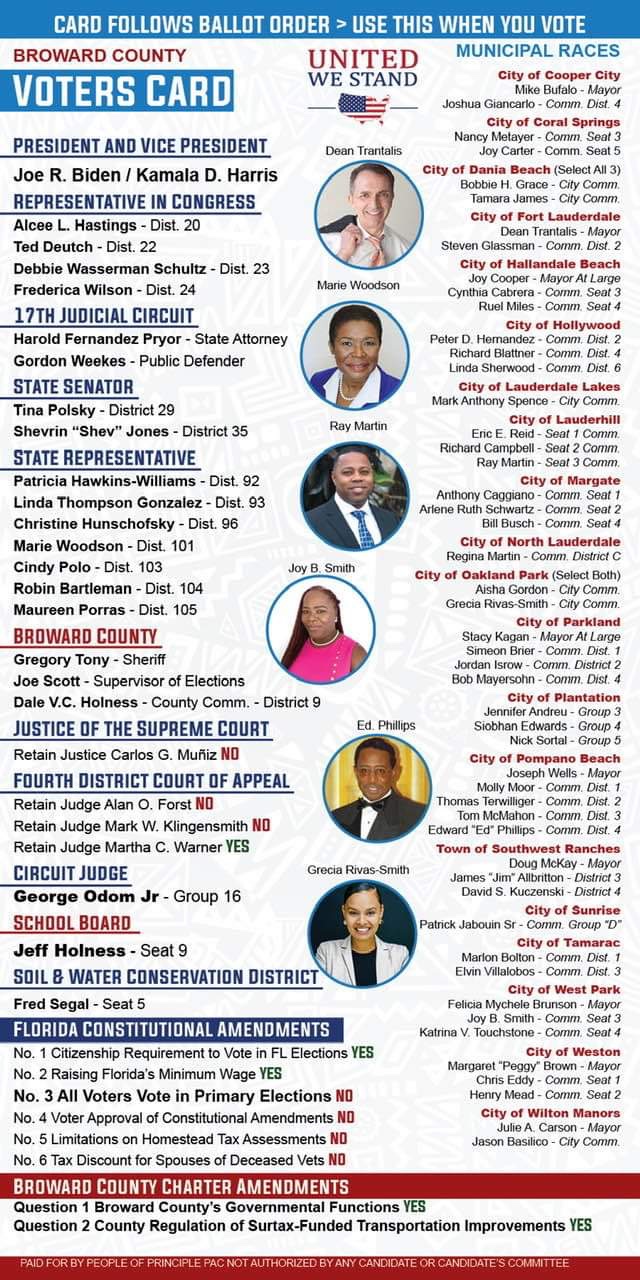 In several of the municipal races, People of Principle endorses Republican candidates over Democrats. In one race, the Team Dale Holness card actually endorses a member of the Broward Republican Executive Committee (BREC).

According the Federal Elections Commission (FEC), the People of Principle PAC was dissolved on July 15, 2020 for failing to report money raised and spent by the shadowy group.

Federal Election Commission (FEC) records show People of Principle PAC was created by Charmalin Brown in January 2019. Brown used the address of a Margate UPS store as the headquarters for the political committee. In April 2019, Charmalin Brown purchased the domain name currently used by People Of Principle PAC.

In addition to costs used to purchase domain and rent a mailbox at the Margate UPS Store, People Of Principle PAC is spending money on advertisements promoting Broward candidates.

In June 2020, People of Principle PAC purchased a full page advertisement in a Sun-Sentinel insert. The back cover of “Legacy” magazine, an “independent supplement by MIA Media & Communications Group to the Sun Sentinel,” featured an ad entitled “Black Community Empowerment.” The advertisement was a typical campaign palm card instructing voters to support Black Democrat candidates.

Within the last week, the People of Principle PAC sent a similar message to Broward voters. Democrats across the county received a “your vote your voice” mailer touting Broward Mayor Dale Holness, Congressman Alcee Hastings and other black candidates. Even though the mailer states “#BlackVotesMatter” and “#BlackExcellence,” the piece includes several white candidates such as Judge Frank Ledee, Judge Patti Englander Henning and Congresswoman Debbie Wasserman-Schultz.

While People of Principle PAC does not show who paid for the advertisements or how much they cost, Broward Mayor Dale Holness has been dutifully reporting his campaign finances to the Broward Supervisor of Elections Office. Holness’ records show his 2020 re-election campaign paid more than $34,000 to Omar Smith or companies associated with Smith.

Of course, People of Principle PAC would not be the first shady political committee tied to Omar Smith and Dale Holness.

A Better Florida For All?

Division of Elections records show Omar Smith is the treasurer of the “A Better Florida For All” political committee.

Omar Smith talked to the Sun-Sentinel about the palm card controversy. Smith “insisted this week that none of the candidates were picked because of financial ties to the political action committee or to any of Smith’s businesses, which perform campaign services.”

Shortly thereafter, the State of Florida revoked the registration of A Better Florida For All. Smith failed to properly submit paper to the Florida Division Of Elections. Attempts to contact Smith failed.

Since the committee is no longer a legal entity, legal steps were made to keep the card from being distributed to voters.

In November, Omar Smith made national headlines when Project Veritas showed undercover video of him calling Florida a “cracker state.” Smith was working for the Andrew Gillum campaign.

While some Gillum supporters claimed Omar Smith did not work for the campaign, financial records show otherwise. According to Florida Division of Elections records, the Andrew Gillum campaign paid Smith’s company, FlyerSmith, $50,000 in August 2018.

Also, the Project Veritas video appears to have been recorded inside Dale Holness’ real estate office in Plantation.

Our Conversation With Omar Smith

When asked why the committee did not file the legally required financial reports, Smith said, “Uh…not the treasurer. I just happened to answer the phone.” Smith would not reveal where the committee office was located. He said he has nothing to do with the People of Principle PAC. But he did admit to being behind the A Better Florida For All Committee.

Smith would not reveal if he works for any other candidates, besides Dale Holness, appearing on the People of Principle PAC materials.

Asked about any work for the People of Principle PAC, Smith said he “gave up the website” as an in-kind contribution. Smith would not reveal who he gave control over to.

When asked why he would not answer simple questions about his role or Dale Holness’ role in these materials, Smith said the People Of Principle PAC has “nothing to do with Mr. Holness.”

When a voter confronted Dale Holness at his fundraiser at a packed Lauderhill restaurant, stacks of the “Black Votes Matter” card were displayed next to Holness’ campaign materials and donation envelopes.

Ever since the controversial card hit mailboxes last week, voters and elected officials have criticized it.

Mailers like these deceive the voters and contribute to loosing[sic] elections. While I like many of the candidates on these cards at first glance it would appear they came from a legitimate organization but they are not. Also lots of races left off…People do your homework know who you are voting for and why?

In a reply to a comment, Sharief wrote the card “may be a county-wide coordinated deception.”

Broward School Board Member Rosalind Osgood wrote the card drew the ire of local religious leaders. She wrote, “Pastor Derrick Hughes call these cards out earlier this week. This card is NOT from the Black Community.” Osgood appears on the card.

Both of those cards were produced by well known political pimps who get paid to produce pamphlets like these in their efforts to give bad candidates false credibility by presenting them with popular candidates and lovable figures. Both of these cards ultimately seek to get a very specific group of people who paid to be there elected—everyone else are just props. There are some quality candidates on both cards who played no role in the schemes. But the lack of integrity by the makers and the sinister deception they are trying to benefit from make both of those cards immediate trash in my house. I pray that not a single voter is fooled by them.

In a separate Facebook post, Jennifer Perelman, bashed the appearance of her opponent, Congresswoman Debbie Wasserman-Schultz (D-Out Of Touch), on the card.

That’s laughable. So they’re endorsing a candidate who takes the second highest amount of money from police PACs as the best person to represent the black community. Talk about encouraging people to vote against their own interests. When you have a community ravaged by injustice and poverty, maybe you shouldn’t keep electing the same corporate tools that profit from that disenfranchisement. What a joke.”

On July 20, 2020, Kayla Butler filed paperwork forming the Stronger Together Florida political with the Division of Elections in Tallahassee. According to the documents, the political committee is located at home on Barnstead Circle in Lake Worth, Florida. The telephone number for the committee is (754) 444-6117.

Campaign reports from the 2016 Broward election show Kayla Butler was a paid intern on the Dale Holness campaign even though she was living in Palm Beach. According to recent social media posts, Butler is a yoga instructor still living in Palm Beach county.

The telephone number for Stronger Together Florida is also found in State records regarding third party groups conducting voter registrations. The number is listed for “All Consulting And Marketing, Inc.” which conducted voter registration drives at 4325 W. Sunrise Blvd in Plantation since May, 2019.

This is the same address for All Broward Realty, Inc, a real estate company owned by Broward Mayor Dale Holness.

On September 8, 2020, the Florida Division of Elections sent a “failure to file” letter to Butler after Stronger Together Florida failed to provide financial information regarding its activities.

“I DON’T KNOW WHY YOU’RE CALLING ME”

REDBROWARD called Richelle Holness to ask about her involvement in voter registration drives and the Stronger Together Florida political committee.

After confirming she was Richelle Holness, she said, “You know you’re calling Richelle. I don’t know why you’re calling me.” After advising Holness that her telephone number was listed in the documents filed with the Florida Division of Elections, we asked what was the purpose of the PAC. Holness said, “You can look it up on FEC [Federal Elections Committee] or whatever.”

When asked if she knew Kayla Butler, Holness said, “Thank you for your time, goodbye” and hung up.

How many times will political committees tied to Broward Mayor Dale Holness be allowed to influence Broward elections? 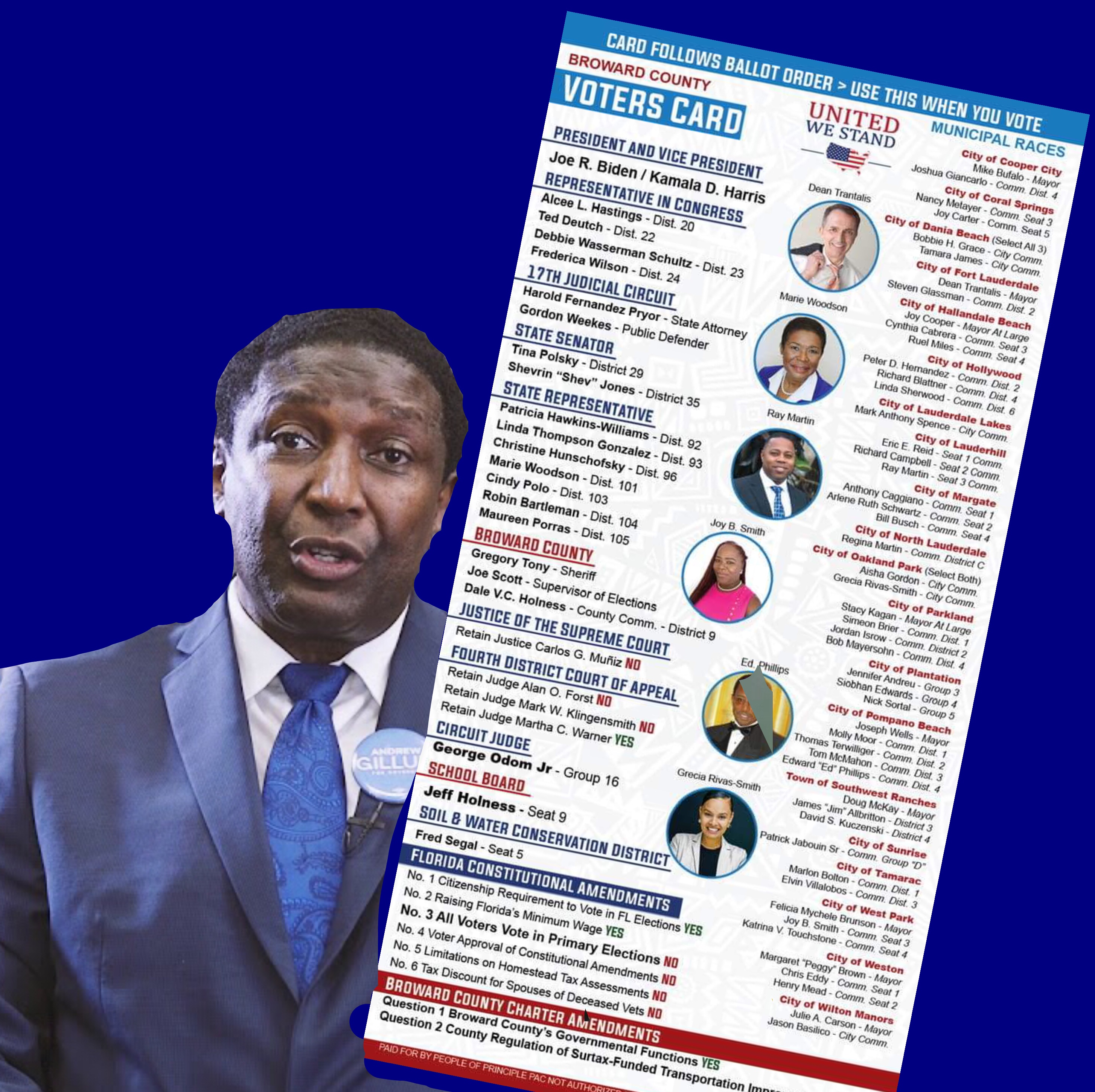