Lighthouse Point political watchers are crying foul over a mayoral candidate’s apparent failure to properly qualify for the March election. Under city code Sec. 22-2(a), “A candidate for city office shall announce their candidacy by filing with the city clerk the notice of candidacy form, the petition of candidacy supported by the signatures of ten registered voters and qualified electors of the city….” In order to qualify, the petitions were due earlier this month. Normally, most politicians would meet the ten voter signature requirement by going out and getting twenty, forty or even a hundred signatures, just in case some signatures were challenged. It appears mayoral candidate Maria C. O’Donnell collected just the ten signatures.

Just one problem. It appears one of her ten supporters is not a registered voter.

The second signature on Maria O’Donnell’s petition is her neighbor, Fannie Currie. A search of local, State, private and public voter registration databases failed to locate any Lighthouse Point voter by that name.  A search of previous names Ms. Currie went by came up empty as well.

It would seem pretty clear, but this is Broward after all…. 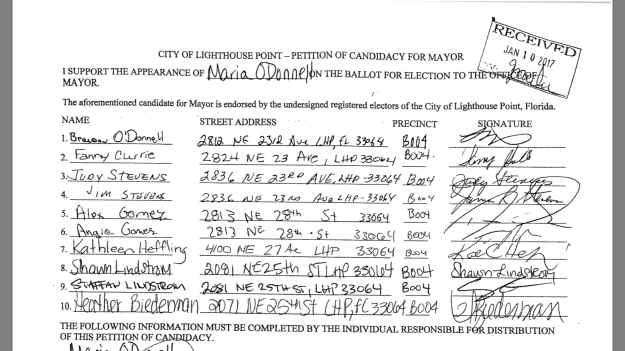 47 thoughts on “Will Lighthouse Point Mayoral Candidate Get The Boot From Ballot?!?”