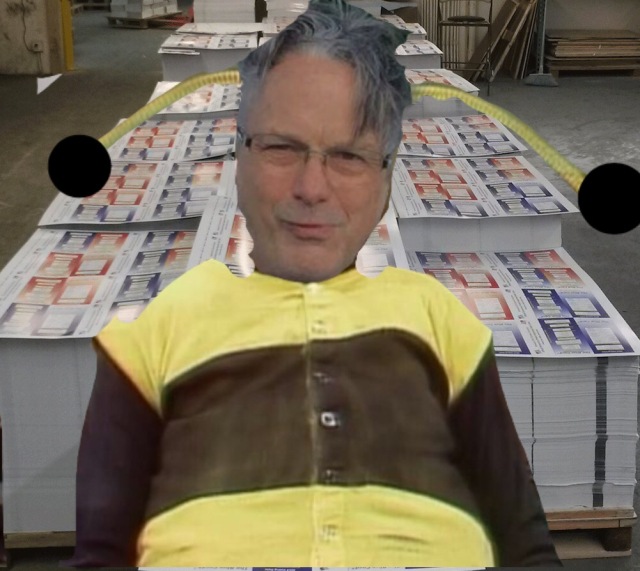 STAR, Inc claimed they solicited no funds to pay for the “blue cards.” The state believed they listed expenditures for $399 (just below a $400 threshold) instead of the actual cost.

In October 2014, Dan Lewis bragged about his “blue card” scheme to BrowardBeat.com. He said he was using the cards to oppose the Broward School Board bond issue. Lewis said, “It comes down to trust, and I just don’t trust the School Board to act in either a responsible or professional manner or neither should you.” Lewis claimed he printed one million cards, with 500,000 to be mailed to Broward voters. Lewis told BrowardBeat he would send the card to 750,000 email address as well.

THE ONE MILLION BLUE CARD MYTH

But State investigators found Lewis did not print one million “blue cards.” Investigators obtained invoices from Lewis’ printer, The Printer’s Printer, and cancelled checks. Robert Zelinka of The Printer’s Printer told investigators he had printed just 200,000 cards for Lewis. Zelinka said just 117,000 cards were mailed to Broward voters. On October 9, 2014, the company submitted an invoice for $12,499 to Lewis’ Strategic Technologies & Research, Inc. Lewis was billed $10,126 for 3 versions of “postcards’ and $2,373 for three different mail “drops.” This invoice was received one week before Lewis told BrowardBeat he had printed one million cards.

Did The Democracy Project hope to fool voters with a fake union bug on the “blue cards?” While that’s not clear, many local Democrats believed Lewis’ “blue cards” were indeed a dirty trick meant to fool Democrat voters. In early November 2014, Palm Beach Democrat officials warned voters about the cards. The Palm beach Post reported, “The palm card, called ‘The Blue Card 2014 Voting Slate,’ appears to target Maria Sachs, the Democratic candidate for State Senator (District 34) and Andy O’Brien, the party’s choice for County Commissioner (District 4), wrote the county’s party chair Terrie Rizzo, in a party email alert. The Blue Card lists legitimate Democratic candidates in other races, but for Sachs’ and O’Brien’s districts, it lists their Republican opponents instead — Ellyn Bogdanoff and Steven Abrams.”

“The cards are blue in color, sent by something called ‘The Democracy Project.’ The Democracy Project is the brainchild of a Broward County-based political strategist who has used the same technique in prior years to influence voters,” Rizzo wrote. “The purpose of these Palm Cards seems to be to confuse Democratic voters into voting for Republican candidates. Please don’t be fooled.”

Attorney Colleen O’Loughlin represented STAR, Inc in the FEC matter. She used many legal tactics to stop the investigation, including a claim that STAR, Inc’s relationship with The Printer’s Printer involved “trade secrets” which were confidential. O’Loughlin even urged the FEC to seek criminal charges against the Broward resident who filed the complaint.

O’Loughlin wanted an FEC commissioner to be removed from the case. She filed a motion to disqualify Barbra Stern, because they did not feel she could be “fair and impartial because her mother, Judy Stern, is a very hostile political opponent of the director of STAR, Daniel Lewis.” O’Loughlin wrote STAR/Dan Lewis, “upon information and belief;[Stern] is directly behind this complaint against STAR-TDP in this matter…”

Dan Lewis did not respond to a request for comment.