Emails obtained by REDBROWARD show Councilwoman Jennifer Andreu connected residents interested in changing the name of the City of Plantation with the activist behind a 2020 petition drive. Inspired by the Black Lives Matter (BLM) protests during the summer of 2020, Dharyl Auguste started a petition to rename the City. Auguste claimed the name Plantation had negative racial connotations which made people of color uncomfortable. Auguste’s activism gained unwanted national attention for the City. But that negative attention did not stop Andreu, first elected in November, from connecting new activists with Auguste.

On January 19, 2021, Plantation resident Risha Stern sent an email to the Plantation City Council and Mayor about a local teenager interested in changing the name of the city. Stern wrote, “Can you please suggest how he could go about this and if any of you are interested in helping make history.”

Just eight hours later, Andreu responded to Stern. She said the teen should connect with “Dharyl Auguste who championed this cause last year. Please friend him on Facebook and I’ll follow up with a message.”

Stern replied immediately to Andreu. She told Andreu the teen and his family don’t “believe in Facebook.” Stern asked, “Any other way?”

REDBROWARD asked Andreu why she would encourage residents to contact an activist seeking to change the name of the City she represents and how she had his personal telephone on hand to share with residents.

Andreu told REDBROWARD, “I have addressed the name change issue at length during the campaign and understand both sides of the issue. If residents want a referendum, they should acquire the necessary signatures. A resident asked me for his information and he said it was okay to give them his phone number. I do my best to keep in touch with everyone who communicates with me.”

But neither Ms. Stern nor the teen asked for the telephone number of Dharyl Auguste. Stern said the teen was interested in the name change but never asked about Auguste. It was Andreu who suggested she contact Auguste.

Why would Ms. Andreu encourage a costly referendum being foisted upon Plantation residents? To say such a referendum would be very divisive is an understatement.

Despite being on the job for mere months, it appears Ms. Andreu has no qualms bringing divisive issues to the doorsteps of residents.

Andreu also met with a Lauderhill commissioner to discuss the “annexation of Plantation” neighborhoods on the east side of the City.

Why is Andreu more interested in political issues than Plantation residents? Is someone giving really bad advice to this political newcomer? 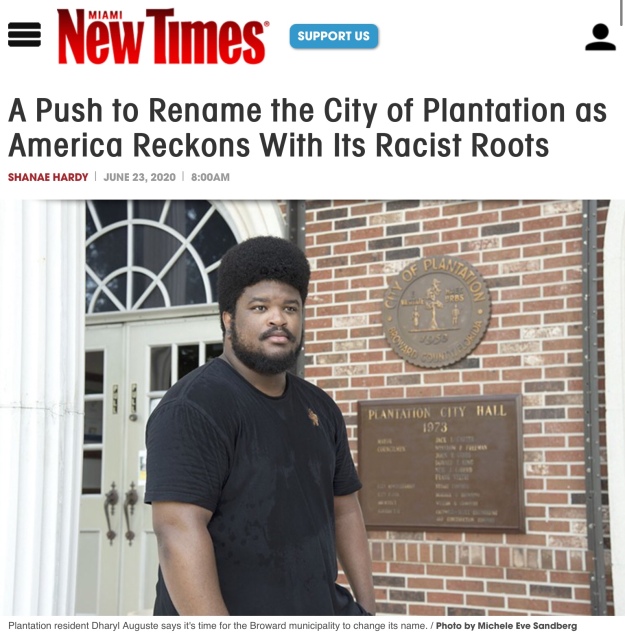