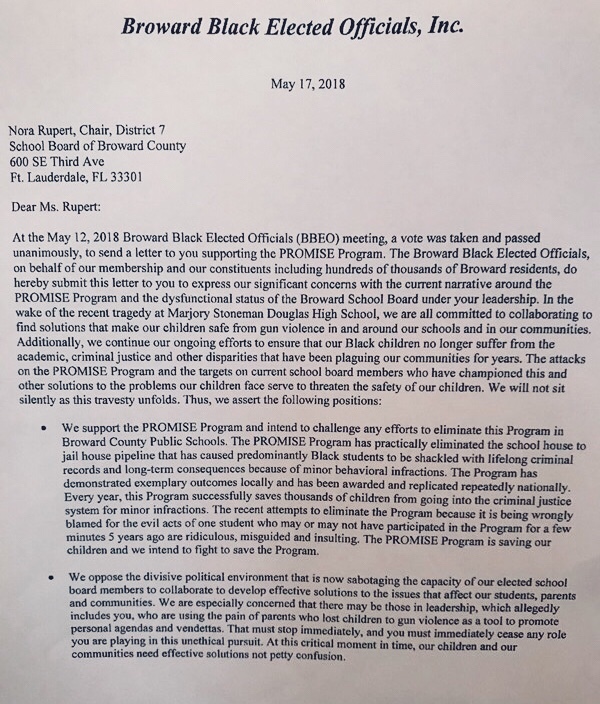 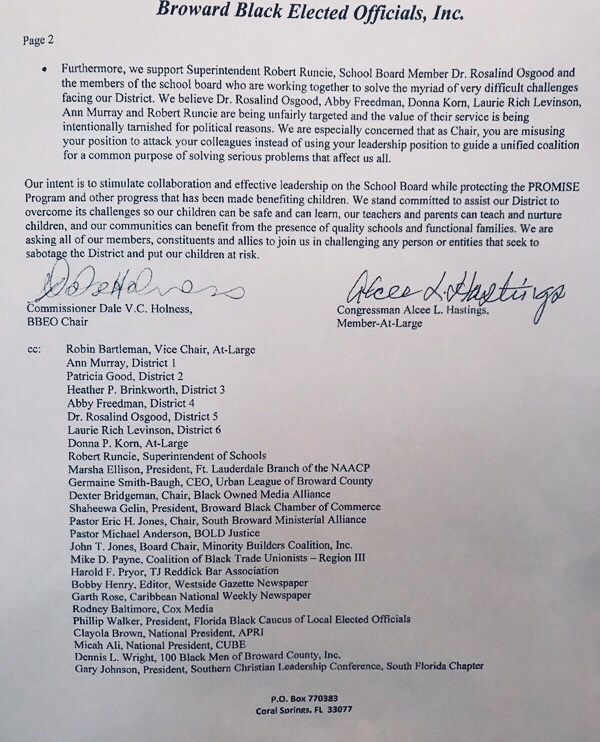 Hastings and Holness told Rupert the current “divisive political environment” was “sabotaging” efforts by local leaders to find new solutions to “issues that affect our students, parents and communities.”

Then, the group claims Rupert is behind the divisive atmosphere.

Hastings and Holness wrote, “We are especially concerned that there may be those in leadership, which allegedly includes you, who are using the pain of parents who lost children to gun violence as a tool to promote personal agendas and vendettas.”

The group called on Nora Rupert to “stop immediately, and you must cease any role you are playing in this unethical pursuit.”

On Friday, Dale Holness said the PROMISE program played no role in the MSD shooting. “His evil didn’t come from Promise,” Holness said. “To take that and punish all the children who are benefiting from Promise is not right.”

Nora Rupert told the Sun-Sentinel she was “a little taken aback by this letter. They didn’t have a ‘for instance.’ We’re all struggling here. I would never do anything to harm at-risk students.”

Rupert is the only current Board Member to receive the backing of the Concerned Parents Of Broward County Group. Rupert is facing re-election in August. This group is supporting a slate of new candidates challenging Board Members Donna Korn, Laurie Rich Levinson, and Ann Murray. Abby Freedman announced she will not seek re-election.

Rupert’s claims to the Sun-Sentinel seem disingenuous at best. Earlier this month, BrowardBeat reported Nora Rupert’s fellow Board Members refused to take a group photo with her. Buddy Nevins wrote, “No, Board members and staff can’t stop whispering about members Abby Freedman, Laurie Rich Levinson and Rosaline Osgood’s refusal to take the traditional group picture as long as Nora Rupert is Board Chair. This from staff and board sources.”

Five years ago, Rupert dug a note out of the garbage can. Nevins wrote, “In 2013 Osgood and Freedman were caught acting like two naughty teens in class, passing a Post-it note on the dais during a meeting. One of them threw the note in the garbage and it was quickly fished out. The Post-it was found contain nasty scribbles about Rupert, calling her a ‘a selfish bitch’ among other terms.”

A fellow Board Member confirmed the story to REDBROWARD five years ago.

Many political insiders believe Nora Rupert won the support of Parkland parents over their belief she will vote to remove Superintendent Runcie.