On Valentines Day 2019, AIDS Healthcare Foundation (AHF) CEO Michael Weinstein presided over the opening of an affordable housing project in east Los Angeles. The renovated “Casa Del Corazon” hotel was the fifth project developed by the Healthy Housing Foundation “powered by AHF” to open in the Los Angeles area. A press release claimed “Casa Del Corazon” would provide affordable housing for nearby college students and youth.

“We’re using multiple approaches to address the housing crisis — new construction, micro-units, renovation of existing structures, we’re looking at all possibilities,” said Michael Weinstein, President of AHF. “The bottom line is we need viable solutions that are economical and fast. Communities can’t wait any longer; the situation is too dire.”

But in his opening remarks, Weinstein appeared to give a new reason for the newest AHF project. He noted the new project is “right across the street” from his AHF pharmacy.

“Part of our philosophy, instead of asking people to travel long distances to come to us,” Weinstein said, “We try, whenever possible, to bring these services to the communities that need them.”

Weinstein said the previous AHF projects were located in Los Angeles notorious skid row district. He said “being able to open this facility in a thriving, working class community, not as dangerous as skid row…is a great thing.”

Weinstein said AHF renovates old hotels because it is “cheaper.” He said his two part philosophy is to make the units truly affordable to renters and to keep costs down to avoid a “heavily subsidized” project.

However, by mentioning the proximity to the AHF pharmacy, Weinstein seems to imply patients and users of AHF services would be tenants rather than mere college students.

Then, Weinstein told the crowd about his controversial fifteen story project in Fort Lauderdale dubbed “Trantalis Tower.” The plan is just as vague when it comes to who will actually live in the Fort Lauderdale project.

Just like “Casa Del Corazon,” the Fort Lauderdale project would be mere steps away from AHF headquarters. Tenants of the proposed project would not have to “travel long distances” to receive AHF services. The latest AHF proposal includes “retail space” in the building. Could this be home to a new Out Of The Closet thrift store? The thrift store is owned by AHF.

While AHF is non-profit, the New York Times noted it’s the only non-profit with a large sales force.

According to the New York Times story about Weinstein, “Pharmacy services are, in Weinstein’s words, A.H.F.’s ‘jet fuel.’ That’s because 70 percent of spending on H.I.V. care consists of drug costs. While H.I.V. patients in the United States skew poor, the costly insurance claims they generate by filling prescriptions make them gold mines, not only for pharmaceutical companies but also for certain pharmacies, like Weinstein’s, that take advantage of a federal program called 340B.” To maintain AHF’s dominance, Weinstein employs a large sales force.

“Weinstein summoned 30 foot soldiers to the Sheraton Hotel in New Orleans for a retreat for A.H.F.’s sales team — a division that doesn’t exist at most nonprofits because most nonprofits have nothing to sell. A.H.F. does: It sells health care to a customer base overwhelmingly composed of patients receiving government assistance, and each new patient it acquires means more cash for its operations. The sales team at A.H.F. is responsible for recruiting new patients, a function they perform by scouring homeless shelters, hosting parties at gay clubs, cozying up to local clinicians and deploying mobile-testing vans to H.I.V. hot spots. It’s a commissions-driven gig. For each new patient who goes to an A.H.F. clinic and fills an antiretroviral prescription at an A.H.F. pharmacy, the rep receives $300. He or she receives an additional $300 when patients fill their prescriptions a second time — the second fill being a more reliable predictor of patient retention.”

The New York Times detailed how the AHF sales force recruits new patients. “To recruit new patients, sales reps are expected to hold several events each month, most of them in high-risk zones. Events vary by location. On Los Angeles’s Skid Row, for example, reps hand out McDonald’s gift cards to anyone willing to take a rapid H.I.V. test. In South Central, the reps sometimes set up a game called Cash Box, in which contestants who agree to a rapid test enter a plexiglass booth where they try to grab cash as it is blown around at high speeds. In gay neighborhoods, reps may invite passers-by to play Dildo Toss — a carny-inspired game in which players hurl phalluses of varying colors and sizes into a hole carved out of a plank of wood. ‘We give them three chances,’ explained Edwin Millan, director of sales for the Western United States, ‘and if it goes in the hole, they get to spin a wheel and they get a prize.'” 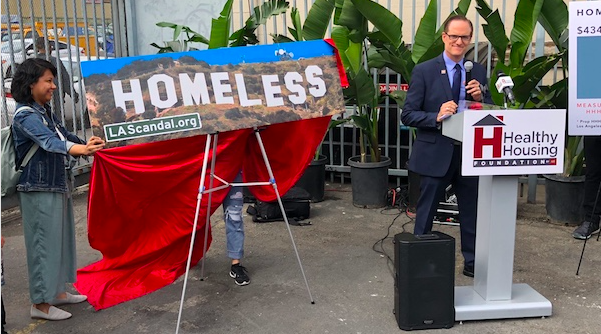