A Friday morning rally in support of Broward School Superintendent Robert Runcie exposed the local elitist attitude towards students, teachers and the rule of law. The downtown Fort Lauderdale rally appears to be the brainchild of controversial Broward County Commissioner Dale Holness who sent emails using his official County letterhead. Robert Runcie was arrested on Wednesday on a felony charge of lying during an official proceeding.

Bob Swindell, CEO of the Greater Fort Lauderdale Alliance acted as the master of ceremonies.

In an epic moment of tone-deafness, Bob Swindell said colleagues from around the country called him to praise the “articulate and intelligent” Broward students who spoke out following the Marjorie Stoneman Douglas massacre. Swindell said it was all due to Robert Runcie.

But these leaders were dead silent when politicians and their shills questioned the integrity of Florida Department of Law Enforcement (FDLE) agents, state attorneys and even the average citizens on the grand jury.

These millionaires said nothing while a Dale Holness ally called the matter a “politrick” and urged revenge at the ballot box.

Swindell and Holness did not plan on taking questions while television cameras were rolling. They planned on stenographers dutifully regurgitating their public relations spin.

We asked if the Greater Fort Lauderdale Alliance, City Furniture and the United Way would tolerate an employee charged with lying to a grand jury. We asked whether the students, parents and teachers of Broward County deserve the lion’s share of the credit for improved graduation rates, improved grades and performance instead of the Superintendent.

These Broward millionaires, business leaders, preachers and politicians grew silent and turned their backs on cameras. 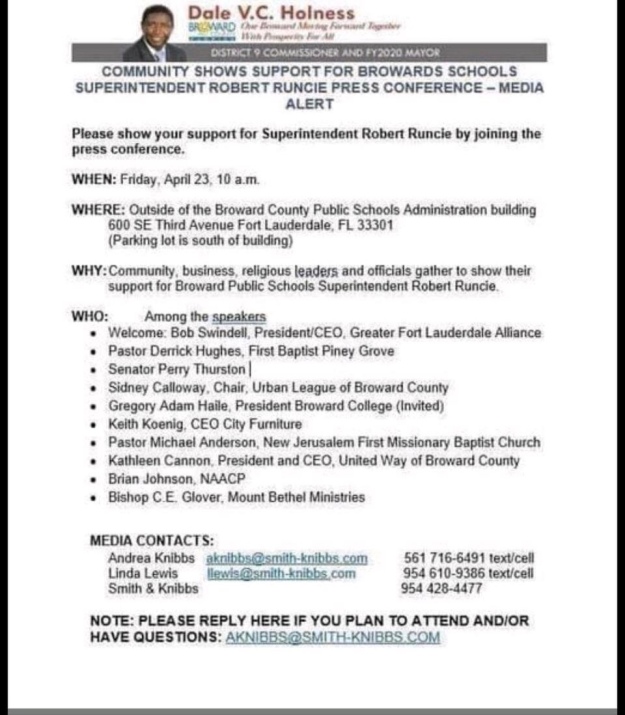