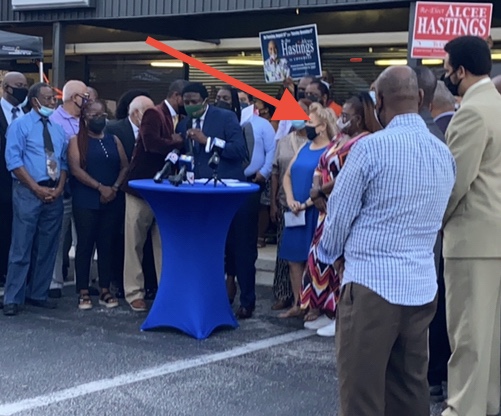 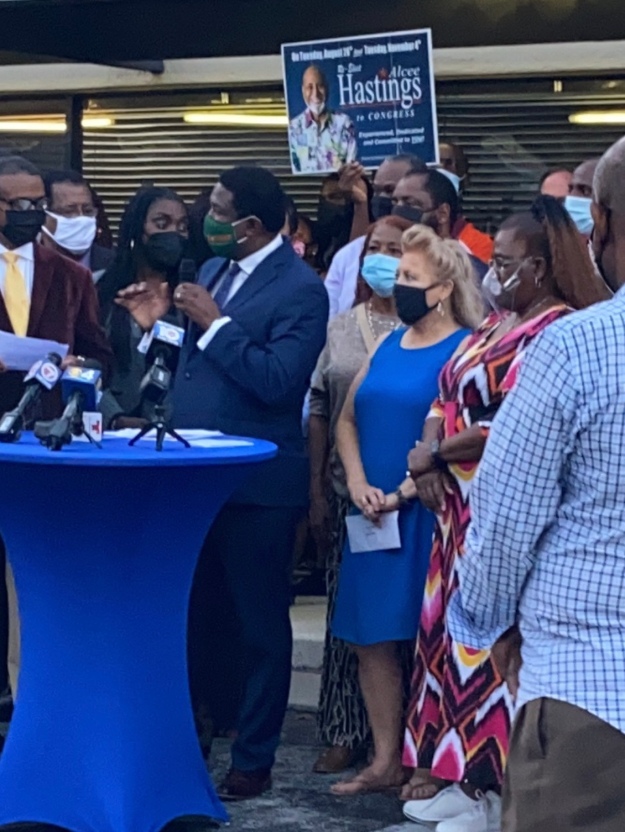 We have seen it a hundred times before-A candidate announces his bid for U.S. Congress while surrounded by friends and well-wishers and his adoring family by his side. And when the candidate realizes he failed to introduce his spouse, the crowd giggles as the candidate apologies profusely. Unless that candidate is Broward County Commissioner Dale Holness.

On Monday evening, Dale Holness announced his bid to replace the late Alcee Hastings in Congress. The 7pm announcement was delayed by thirty minutes while Holness waited for key members of “Team Holness” to arrive at his real estate office in Plantation.

With disco music playing and the daylight fading, friends and media milled about the parking lot. On the sidewalk in front of office, Kimberly Williams manned a table checking in campaign volunteers.

When Dale Holness finally started the program, Kimberly Williams remained at the table. As Alcee “Jody” Hastings II endorsed Holness, Williams  can be seen peeking over the crowd surrounding him.

By the time embattled Broward Sheriff Gregory Tony endorsed Holness, Kimberly Williams had finally worked her way to the front of the crowd.

The front of the crowd next to Dale Holness is where his wife, Kimberly Williams Holness belonged all along.

Even as darkness fell over the parking lot, Dale Holness continued to introduce politicians. He allowed current officials and former politicians to parade in front of the cameras. Commissioners from Lauderhill, Miramar and Tamarac were treated as celebrities as they came up to endorse Holness. No politician was too obscure as long as the professed their allegiance to Team Holness.

But Dale Holness never introduced his wife. No mention at all as she stood by his side.

Holness just smirked. No feigned embarrassment. No pleas for forgiveness. Holness did not run a few feet to bring his wife in front of the cameras.