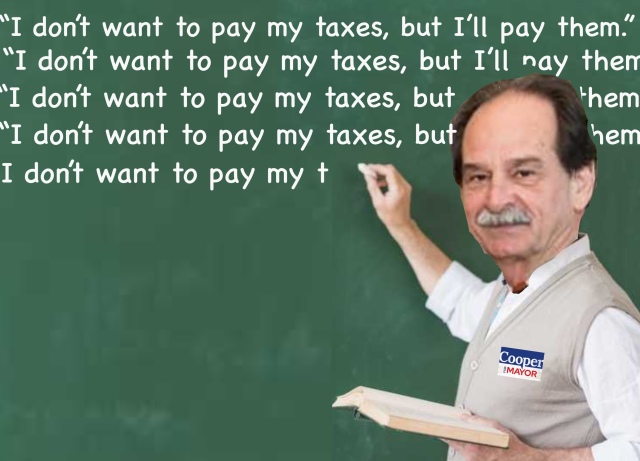 During a candidate town hall last week, self-proclaimed economics expert and Fort Lauderdale mayoral candidate Ken Cooper said the City of Fort Lauderdale should have created a “sinking fund”– an account to save money to pay for expected future financial obligations. Cooper bashed leaders for not having foresight to saving money to pay for new infrastructure and repairs. Yet, it appears Cooper never took the same advice when it came to his taxes. Since 2010, Ken Cooper has been the subject of multiple Federal and State tax liens, records show. The liens coincide with tax certificates issued on Broward properties owned by Cooper for delinquent property taxes.

Earlier this month, the Sun-Sentinel editorial board eviscerated Cooper over his failure to pay property taxes.

Broward property appraiser records show Ken Cooper paid $156,000 in November 1996 for the property located at 506 S.E. 8th Street in Fort Lauderdale. Since 2000, fourteen tax certificates were issued on this property when Ken Cooper failed to pay property taxes on time.

Broward property appraiser records show Ken Cooper paid $90,00 in November 1986 for the property located at 400 S.E. 8th Street in Fort Lauderdale. Since 2000, ten tax certificates were issued on this property after Ken Cooper failed to pay his property taxes on time.

It appears the Sun-Sentinel discussion was focused on these two commercial properties owned by Ken Cooper.

But according to the Broward Tax Collector website, the home where Cooper lives also has tax issues. Cooper’s waterfront Fort Lauderdale home is owned by his wife. Records shows seven tax certificates issued for delinquent property taxes since 2012.

Cooper told the Sun-Sentinel his taxes would be paid that week. And they were.

On social media, Cooper supporters tried to paint his failure to pay taxes as evidence of his business savvy. Instead of paying taxes on time, one Cooper supporter claimed he used the money to help his employees during the COVID-19 lockdown.

Others claimed Cooper actually made money by investing in other ventures instead of paying his taxes on time.

Cooper himself defended his actions in a Facebook post. Cooper said, “I own all my properties out right and have negligible debt. Because of that, the law specifically provides me the option to not pay my property taxes immediately–I pay interest on that decision–and I want to make clear we are not talking about my income taxes, which are always paid timely.”

REDBROWARD obtained copies of two Federal tax liens filed against Ken Cooper including one which appears to deal with income taxes.

In October 2011, another Federal tax lien was filed against Ken Cooper and his spouse related to 2007 taxes. The IRS claimed the Coopers owed $54,346.72 to the Federal government. A release was filed on October 27, 2016.

In addition to the Federal tax liens, the State of Florida filed liens against Ken Cooper four times since 2015.

In February 2015, the State placed a liens totaling $6,482.25 for taxes owed related to Cooper’s 8th Street properties. The liens were released in June 2015.

And Ken Cooper wants to lecture us on saving money for emergencies, tax cuts and spending issues?

Most homeowners get nervous when property taxes are due. They don’t see missing a tax payment as an investment opportunity legally afforded to them.

Ken Cooper told the Sun-Sentinel paying his taxes were a “source of aggravation” for him.

“I’m sick and tired of of paying, I’ll tell you that,” said Cooper.

Fort Lauderdale voters are tired of politicians not practicing what they preach.

Broward voters want all laws that apply to them to apply to the politicians who,passed the laws.

First Broward Mayor Dale Holness doesn’t pay his property taxes, now Ken Cooper wants to be Mayor of Fort Lauderdale even though he doesn’t like to pay the bill. 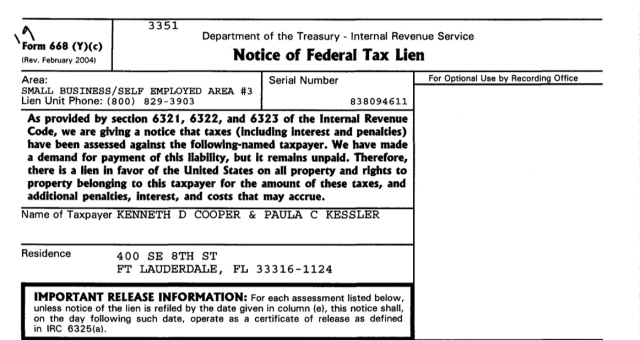 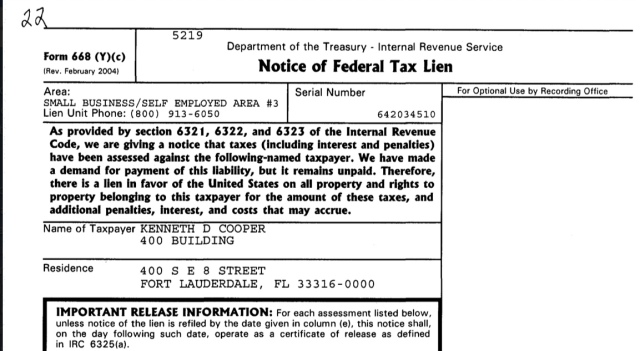