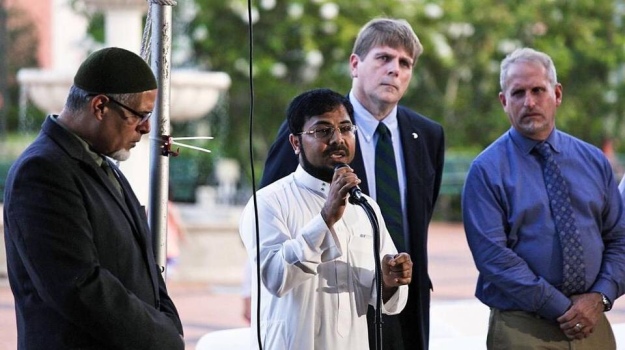 Back in 1999, Pastor Randal Cutter claimed God gave him visions of a hurricane which would devastate South Florida. In 2019, Coral Springs City Commission candidate Randal Cutter knew his hurricane dreams would lead to a political storm. Yesterday, REDBROWARD reported how Cutter’s 1999 appearance on WPTV NBC 5 was being shared amongst Coral Springs voters. In an attempt to address the concerns about his well-publicized dreams, Cutter made the controversy the subject matter of his sermon last Sunday at the New Dawn Community Church.

After the REDBROWARD story was published, a Cutter campaign supporter informed us last Sunday’s sermon was added to a video clip of Pastor Cutter’s 1999 television interview.

The eight minute clip shows Cutter explaining how the Hurricane Irene dreams issue was a positive for the church. He said it was a “supernatural” act in an “age of anti-supernatural” thinking. He paraphrased author C.S. Lewis, who said Satan tricks people to deny the supernatural. Cutter said people become “magicians” who reject God’s supernatural acts.

Cutter said it was, “certainly an obvious thing that did happen.” Cutter said his appearance, “got a lot of advertisement in the community.” Cutter said the visions were, “one of the historical things God has done for this congregation.”

Regardless of your view of Cutter’s visions, his sermon appears to be the standard stuff found in many churches.

But he did not stop there.

For some reason, Cutter repeatedly mentions how he shared his Hurricane Irene television appearance with local Jewish rabbis. When discussing his visit to a Weston temple, Cutter Tells his congregation, if you “want to see people trained at a high level…look to the rabbis.”

In an effort of “full disclosure,” Cutter says he shared his Hurricane Irene story with a Coral Springs rabbi. He said when the rabbi asked him to join a City multicultural committee, he told him he was the kind of guy to went on television to talk about visions from God about hurricanes.

Cutter said the rabbi only asked if he asked for money during the interview. Cutter said he did not ask for money. The rabbi said it was good that Cutter did not exploit the visions for personal gain.

(Cutter makes no mention of a book he wrote about his hurricane visions.)

But Cutter does claim he would never exploit the Hurricane Irene visions for political gain because it would be “wrong.” Stunningly Cutter tells his congregation:

It would be wrong to exploit while running for office. But there’s whole constituencies in Coral Springs that if they knew about this. We have a tendency to say, my God it’s better to have one of him than a whole bunch of those other people! Because they would be thinking maybe he has an edge with God.

Umm. Who are “those other people?”

Does Randal Cutter think he has an “edge with God” that his opponents lack?

Some may be quick to claim Cutter is referring to Khurrum Wahid, one of his five opponents, who is the legal advisor to the Council On American Islamic Relations (CAIR). This is doubtful since Cutter regularly appears with local Imams and other leaders. In 2017, the Miami Herald showed Cutter attending a CAIR rally at Wahid’s mosque in Sunrise.

While most of the Coral Springs election coverage remains focused on Khurrum Wahid’s bogus claims of “racism” and “xenophobia,” a whisper campaign targets one of his opponents, Randal Cutter. This underground campaign details how in 1999, Cutter, the pastor of New Dawn church, claimed God gave him visions of an approaching hurricane. Cutter made no secret of the visions he claims God gave him.

The dreams which purportedly warned Cutter about Hurricane Irene are blasted all over the New Dawn website. In 1999, Cutter appeared on WPTV 5- NBC in West Palm Beach to discuss the visions. Plus, a book Cutter wrote about the Hurricane Irene visions can be purchased now on Amazon.

Despite the public nature of Cutter’s visions and claims he was chosen by God to warn others about Hurricane Irene, someone has been sharing these stories with Coral Springs residents just days before the upcoming June 18th election. In addition to a link of the WPTV broadcast, a copy of Cutter’s letter to local religious leaders about the visions is being shared.

The blurry images appeared to be pulled directly from Cutter’s book, Whatever You Bind On Earth: Authority To Stop Hurricanes. In the book, Cutter says he sent the letter to more than fifty churches. He hoped to get other churches to heed his warning about the hurricanes. According to Cutter, only 6 church leaders responded to the letter.

Despite questions about the validity of Randal Cutter’s visions, it is clear someone wants to expose his non-mainstream religious beliefs before voters hit the polls. At least three campaigns contacted by REDBROWARD were aware of the WPTV video, but each one denied any intent to use the video.

Even the Sun-Sentinel jumped into the religion-bashing when it stated Cutter had just 125 members in his flock. Sources say Cutter told Sun-Sentinel editor Rosemary O’Hara the number was closer to 140 members. 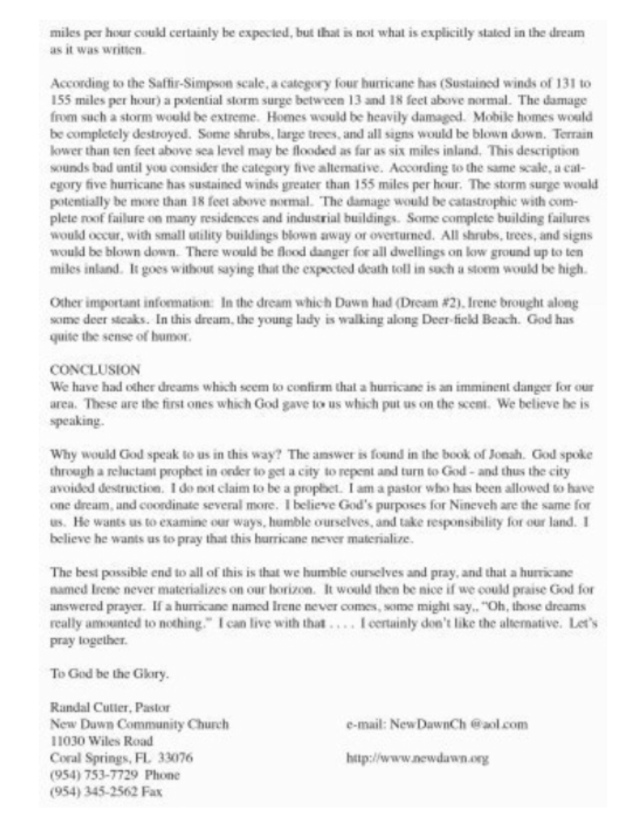