The owner of a Jamaican cricket team made large contributions to a Federal political action committee (PAC) tied to Broward County Commissioner Dale Holness. In 2017, Holness was the driving force behind giving control of the Broward County-owned cricket stadium to Krishna “Kris” Persaud, the new owner of the Jamaica Tallawahs. As REDBROWARD reported, Dale Holness worked hard to give Persaud control of the $80 million dollar cricket facility along Sunrise Boulevard. Holness said, “Kris Persaud and his team members are willing to invest their own funds to help Broward County utilize [the] stadium to fulfill its mission of providing international cricket games that will not only bring tourists to Broward County, but also grow our economy and create jobs for the people of Broward County.” Campaign records show Kris Persaud was more than willing to invest his money in Dale Holness as well.

Federal Election Commission (FEC) records show People of Principle PAC was created by Charmalin Brown in January 2019. Brown used the address of a Margate UPS store as the headquarters for the political committee. In April 2019, Charmalin Brown purchased the domain name currently used by People Of Principle PAC.

For months, the PAC failed to file the required campaign reports documenting money raised and spent on political activities.

When the reports were finally filed after the November election, only the contributions were provided for review.

Amazingly, this was not the first time Kris Persaud gave money to a shady political committee with ties to Dale Holness.

In August 2016, REDBROWARD exposed Persaud’s financial support of a local shadowy political committee supporting the re-election of Dale Holness. The Latino Vote funded by Persuad, the director of a Cayman Islands-based reinsurance company. Formed in 2015, The Latino Vote of South Florida political committee received its first contributions one year later. Four of the five contributions were the apartment developments owned by Persaud, the director of Oxbridge RE Holdings in the Cayman Islands.

Just like the People of Principle PAC, The Latino Vote failed to list expenditures even though its mailers were showing up all across Broward. The group’s card featured the likenesses of Holness and Congressman Alcee Hastings. The card was dubbed the “diversity ballot.”

The card urged voters to “increase diversity” by voting for African-American judicial candidates, but the real stars of the card were Hastings and Holness.

Records show companies owned by Persaud made direct contributions to Holness’ campaign. According to the Broward Supervisor of Elections website, in 2016, The Latino Vote made two $1,000 campaign contributions to the Dale Holness campaign.

Why is Dale Holness tied to so many shadowy political committees? 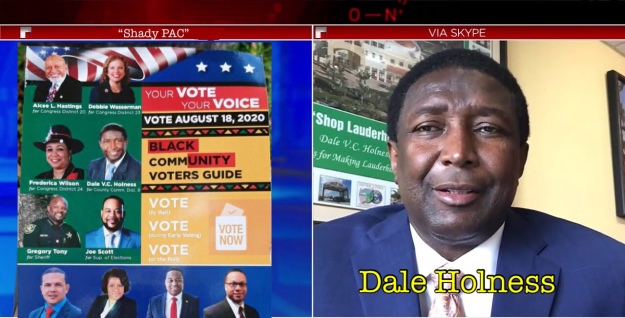