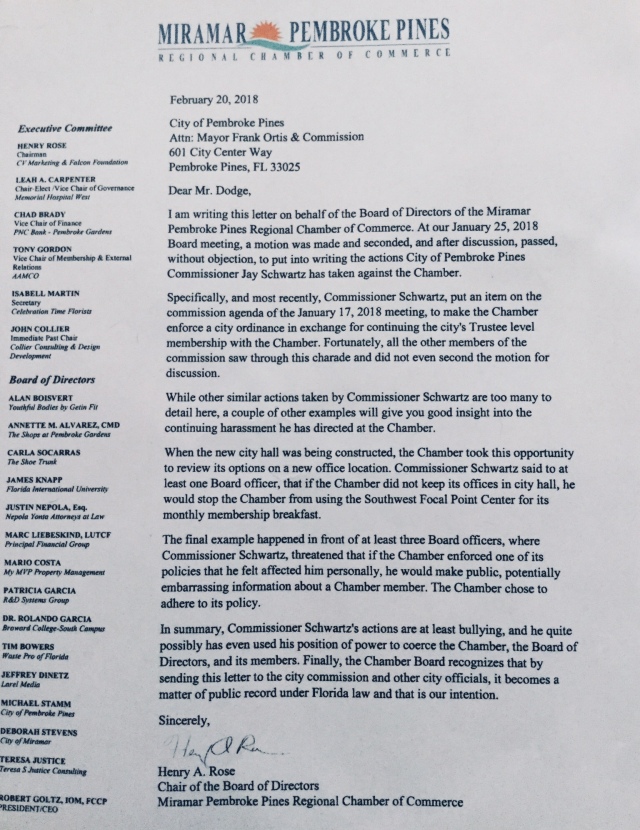 In his letter to Charlie Dodge, Henry Rose, Chair Of The Chamber, said Jay Schwartz attempted to “make the Chamber enforce a city ordinance in exchange for continuing the city’s Trustee level of membership with the Chamber.” Rose claims Schwartz’s agenda item failed when, “all other members of the commission saw through this charade and did not even second the motion for discussion.” Rose wrote that Schwartz has taken numerous similar actions against the Chamber.

In the letter, Rose claims Schwartz leveled a threat at least one board member regarding the Chamber’s meeting space. Rose said the threat came during construction of the new city hall. According to Rose, “[Schwartz said] that if the Chamber did not keep its offices in city hall, he would stop the Chamber from using the Southwest Focal Point Center for its monthly membership breakfast.”

In the final example, Rose said Schwartz issued a threat in front of at least three board officers. According to the letter, “Commissioner Schwartz threatened that if the Chamber enforced one of its policies that he felt affected him personally, he would make public, potentially embarrassing information about a Chamber member.” Rose told Dodge the Chamber chose to adhere to its policy.

In closing, Rose wrote, “Commissioner Schwartz’s actions are at least bullying, and he quite possibly has even used his position of power to coerce the Chamber….” Rose finishes by stating the Chamber realizes this letter may become a public record. “[T]hat is our intention,” he wrote.

The Chamber Of Commerce letter is not the first time Commissioner Jay Schwartz has been accused of using threats against Pines residents.

Last month, Carlos A. Marcos told Pembroke Pines Police that Commissioner Jay Schwartz threatened to “expose” him if he ran for office. After Marcos filed a police report with the Pembroke Pines Police, an investigator made contact with a witness who said Schwartz made a specific threat against Marcos. According to the police report, Judith Richard said she spoke with Schwartz at September 2017 funeral.

Ms. Richard said Schwartz “approached her and asked to speak to her privately.” Once in a hallway, she told police that Schwartz delivered his threat.

According to Richard, Schwartz said “You need to convince your friend, Carlos, to drop from the running for election of commissioner for District 1 or else I’ll expose all of his criminal activity.” She said Schwartz threatened her if she did not deliver the message.

Richard claims Schwartz said, “If you do not tell him then you will be associated with him and criminal activity.”

Richard told police she told Marcos about the threat after Pines City Manager Charlie Dodge told Commissioners that Schwartz and his wife, Stacey, had made improper contact with city employees.

City manager Charlie Dodge stunned his bosses at a January City Commission retreat with accusations that one Commissioner was violating the city charter by conducting an “inquisition” of employees. At the end of the meeting, Dodge told Mayor Frank Ortis he had one last item to discuss. Dodge laid out evidence that a fellow commissioner “intimidated” city employees to the point they “feared retaliation” if they did not cooperate.

Charlie Dodge said, “It is really unfortunate today that I feel compelled to bring your attention…to an ongoing problem…I believe is an ongoing violation of our city charter by a member of the city commission.” He said, “There’s no other way to address this issue in a private way because that could be a violation of sunshine laws.” Dodge said he hoped for “a development of trust,” but the commissioner repeatedly questioned staff about issues and their supervisors.

Dodge said this was just the latest example of this Commissioner’s attempts to “derail” his administration.

In addition to spreading”misinformation” about Pembroke Pines water quality issues, Dodge said this Commissioner provided a “constant criticism of employees.”

Dodge said even the spouse of this Commissioner would contact employees to ask the same questions. Dodge called this behavior “totally unethical.”

According to Sorensen’s email, it was during this meeting that Tropeano revealed Commissioner Schwartz and his wife “frequently call” Special Events Coordinator Francine Novo. According to Tropeano, Novo said Stacey Schwartz wanted her opinion on the current Director of Recreation as well as previous directors.

Following this revelation, Sorensen scheduled a meeting with Novo.

Francine Novo confirmed Tropeano’s account. She told Sorensen she gave an opinion on previous directors but said nothing about the current director or the current Recreation Department administration. Novo said Stacey Schwartz approached her at events “all the time” which makes her feel “uncomfortable.”

All of these threats come as Jay Schwartz tries to stack the City Commission with allies.

Commissioner Jay Schwartz was listed as Tringo’s campaign treasurer. While politicians are often involved behind the scenes, they rarely put their names on campaign paperwork. Schwartz listed his home address on NW 16th street as well as his campaign email, “votejayschwartz@gmail.com.”

Less than a week later, the wife of Commissioner Jay Schwartz filed paperwork with the State of Florida creating a new business entity–Blue Skies Management Group, Inc. Stacey Schwartz is listed as the president of this new corporation located at the Schwartz home on NW 16th Street in Pembroke Pines.

REDBROWARD wanted to ask Stacey Schwartz about these payments. We caught up with her at a recent Dave Tringo event outside a Pembroke Pines restaurant. While initially friendly, Ms. Schwartz ran when we started asking questions.

Emails to Commissioner Jay Schwartz are being returned as undeliverable. 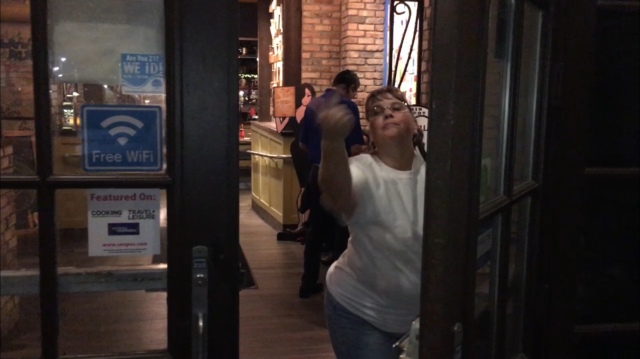