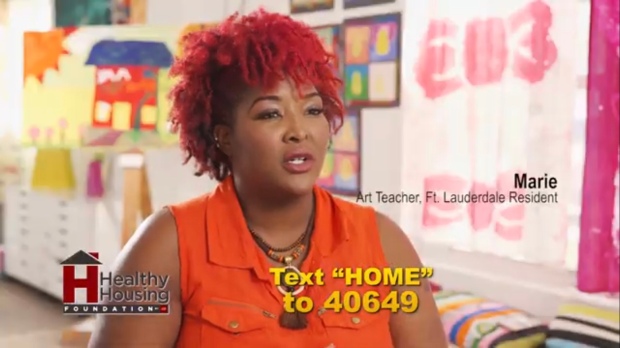 Marie Huntley is featured prominently in an AIDS Healthcare Foundation (AHF) commercial attacking Fort Lauderdale Commissioner Ben Sorenson over a sixteen story monolith planned near downtown which would house homeless and at-risk citizens. After residents complained at a townhall meeting, Sorenson and other Commissioners grew concerned about the size and scope of the project dubbed “Trantalis Tower.”

Since that meeting, AHF CEO Michael Weinstein and supporters tried to demonize opponents. At his disastrous December press conference, Weinstein threatened reporters and residents who questioned his claims that race played a large role in the opposition. Other Trantalis Tower proponents have claimed residents who question the project may be homophobic or anti-poor. Even those residents who actively support affordable housing initiatives are said to be suffering from NIMBY (NOT IN MY BACKYARD) syndrome.

AHF is running commercials on local television urging voters to contact Sorenson. In the latest commercial, Fort Lauderdale resident Marie Huntley discusses the affordable housing crisis. Huntley says, “We do have a problem with people being pushed out of neighborhoods…the solution to this is affordable housing.”

Huntley does not live in the area where Trantalis Tower is planned. New developments in the area were built with affordable housing components.

Like other AHF shills and supporters, Huntley talks a good game when it comes to other peoples’ neighborhoods.

This week, Huntley, better known as “Miss Peaches,” sang a different tune about a new project in her neighborhood.

“RESISTANCE” AGAINST ALL DEVELOPERS (EXCEPT AHF)

As REDBROWARD exposed last month, AHF and its Healthy Housing Foundation continue to support “resistance” against California developers seeking to build projects around Los Angeles. This ideological battle is nothing new to AHF CEO Michael Weinstein.

In the 1960s, a teenaged Michael Weinstein joined a “group of activists occupying” a New York high-rise development to protest the gentrification of their Brooklyn neighborhoods. According to an April 2017 exposé in the New York Times Magazine, Michael Weinstein’s an “ex-Trotskyite” would create one of California’s first gay communist organizations.

In 2016, Weinstein supported California activists who likened housing and office developments to racism and ethnic cleansing.

One left-wing activist described his fight to stop a new shopping mall from being built in Leimert Park, a predominantly African-American neighborhood near Los Angeles. He claimed the Leimert Park “gentrification is basically cultural erasure, urban cleansing, a reduction of people and land into dollar signs.” The activist claims the “perpetrators of gentrification” are not limited to “global capitalists.” This activist even attacks “flippers looking to make a buck.” He says, “there is a target on every tenant” in Leimert Park.

The Fuse Group wants to put an office building and parking garage on the corner of Sistrunk Blvd and Powerline Road, a historic African-American neighborhood in Fort Lauderdale. The land is currently occupied by a small neighborhood market.

According to the Sun-Sentinel, a neighborhood meeting about the project quickly centered on race and gentrification.

“The dream of the city is to change the tenor of the neighborhood, period. I don’t like the word gentrification, but basically, that’s what it is,” said Sydney London, who lives in the Durrs neighborhood off Sistrunk. “There are white folks that moved into the neighborhood, and we all know once that starts happening, you know what’s next.”

The story quoted an e-mail sent to developers and elected officials by Miss Peaches.

Neighborhood leader Marie “Miss Peaches” Huntley said the Home Beautiful Park Civic Association doesn’t support it. In an email to elected officials and Peretz last fall, she said the idea of a new building sounds attractive, but no one knows what will be in it. And there’s more:

“We are deeply concerned about being displaced by gentrification,” she wrote. “Your plan appears to be geared towards drawing customers from outside our community to create profits for you and your investors.”

At his December press conference, Michael Weinstein filled his remarks with the political language of an experienced communist activist. He asked, “Will Fort Lauderdale…and these other communities of great wealth, continue to be places that are hospitable to people of low income or will these cities become, in essence, rich ghettos.”

Who elected Michael Weinstein? Why should we let Weinstein and his shills force change on neighborhoods when they fight change in their own backyards? Who put AHF in charge of Fort Lauderdale development and social policy?