According to 2016 Federal records, Broward State Committeeman Richard DeNapoli made multiple contributions to the Presidential campaign of former Florida Governor Jeb Bush. Those same records show DeNapoli gave $0 to President Donald Trump. Is this why the Sarasota Herald-Tribune called Richard DeNapoli a “moderate” Republican in August 2016?

In October 2015, Richard DeNapoli was named to Governor Jeb Bush’s Broward campaign team along with frequent ally Rico Petrocelli. Federal campaign records show DeNapoli’s support of Bush began months earlier. In January 2015, DeNapoli made a contribution to the “Right To Rise PAC,” a pro-Jeb Bush political committee which attacked Sen. Marco Rubio. According to the New York Times, “Some Right to Rise donors have been worried for months about attacking Mr. Rubio, especially after Right to Rise showed a video it had made portraying him as unelectable, because of his hard-line views against abortion….”

In June 2015, Richard DeNapoli made two contributions to the Jeb Bush political committee. He made his last contribution in September 2015. By late February 2016, Jeb Bush dropped out of the race. Less than two weeks later, DeNapoli jumped ship to support Donald Trump.

DeNapoli tried to explain his rationale to the Sun-Sentinel. “Clearly the sentiment out there is a lot of Republicans are fed up. Not only with the establishment, because they haven’t delivered on a lot of promises. And they want someone who can disrupt the system and get things accomplished. And Trump is their champion,” DeNapoli said. “They’ve heard these promises for years and years, and they don’t feel they’ve been delivered on.” Even though DeNapoli was part of the party establishment, he was named “Fort Lauderdale area director of Trump’s presidential campaign.”

I ALWAYS SUPPORT OUR REPUBLICAN NOMINEES

Even though Richard DeNapoli likes to say, “I always support our Republican nominees,” he has been dogged by accusations of lukewarm support of these candidates. In 2010, DeNapoli was a strong supporter of Charlie Crist’s US Senate campaign. Federal records show DeNapoli was an early supporter with a $1,000 contribution in December 2009. After Marco Rubio defeated Crist for the nomination, some Rubio backers claimed DeNapoli did little to help. Javier Manjarres gave DeNapoli the dreaded “Charlie Crist Republican” label.

Federal records do not show any 2010 contribution to Rubio by DeNapoli.

That same year, Richard DeNapoli was an early supporter of Bill McCollum’s bid for Florida Governor. According to his “conservative” resume provided to members of the Broward Republican Executive Committee (BREC) in 2010, DeNapoli was, “Named to Broward County Political Leadership Team, Steering Committee, Bill McCollum for Governor.”

DeNapoli made two contributions to McCollum in 2009 and a third just before the August 2010 primary. McCollum was soundly defeated by Rick Scott. DeNapoli told BREC members, “I proudly supported Bill McCollum in the primary – my commitment to his campaign began prior to my time as BREC Treasurer…and when McCollum lost I proudly supported our Republican nominee and now Governor-Elect Rick Scott. I always support our Republican nominees.”

In 2016, BREC failed to include Judge Nina DiPietro on its list of endorsements. Her husband, David DiPietro was former legal counsel for BREC.

After some prominent Republicans complained about DiPietro’s exclusion, BREC was forced to print new endorsement cards. Buddy Nevins of Browardbeat.com “was also told that the board of directors of the local GOP were split over whether to redo the cards, which will be distributed to select voters. A number of directors opposed changing the list to include Judge Di Pietro.”

According to former BREC Chairman Robert Sutton, one particular BREC Board member did not want Judge Nina DiPietro the palm card.

“Richard DeNapoli did not want Nina DiPietro to get the BREC endorsement,” Sutton told REDBROWARD.

In an October 2016 e-mail to REDBROWARD, DeNapoli included the endorsement card without DiPietro. He said it was available on the party Facebook page. DeNapoli wrote, “This was the finalized guide as decided by the Board and amendments voted upon by the BREC members at the September meeting.”

Sutton said party leaders in Tallahassee were extremely angry over the slight and the cards were reprinted.

In October, Javier Manjarres of the Shark Tank asked why the BREC leadership decided to endorse Demmery, a Democrat public defender over Corey Cawthon, a registered Republican.

Manjarres wrote, “This is disgraceful for Republicans, but is an expected move from the embattled misfit group of Republicans who supposedly represent all Broward Republicans.”

According to Manjarres, Chairman George Moraitis, “affirmed the decision, stating that the decision was made to endorse after ‘the attorneys’ recommended it. Moraitis did not say who the attorneys were.”

Other than Moraitis, the only attorneys on the BREC Board are Kevin Moot and Richard DeNapoli.

Did Jeff Brown know DeNapoli was an intern in the Clinton White House?

Is Brown part of the “Praetorian” guard soliciting business from local candidates?

What does Richard DeNapoli know about Jeff Brown’s involvement (if any) in websites attacking BREC members?

When we asked Jeff Brown some of these questions, he hung up the phone.

Richard DeNapoli has not replied to repeated requests for comment. 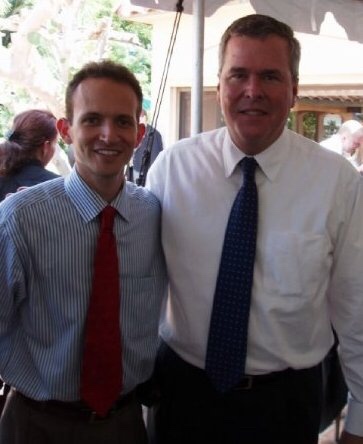